DRONE FUND held the 5th Chiba Dojo Drone Sector Training Camp on October 30, 2020. Initially, it was scheduled to be held in February 2020, but due to concerns regarding coronavirus, it was postponed, and finally held eight months later. Chiba Dojo adopted the first online and offline hybrid format in its history, and 61 C-suite members from our investee startups participated. (A detailed article of the 4th Camp can be found here.)

The final session “Social Implementation in 2025 —Future Image of Drone-enabled Society-“, was particularly profound and offered a lot to discuss and reflect on.

DRONE FUND has created an environment where startup managers across the same industry can gather together and share knowledge with each other in an environment of professional confidentiality — therefore, the contents of our previous training camps have not been disclosed to the public. However, this time, based on the proposal of Mr. Washiya (COO of ACSL), and chief organizer of this training camp, the topics covered in the final session will be released. 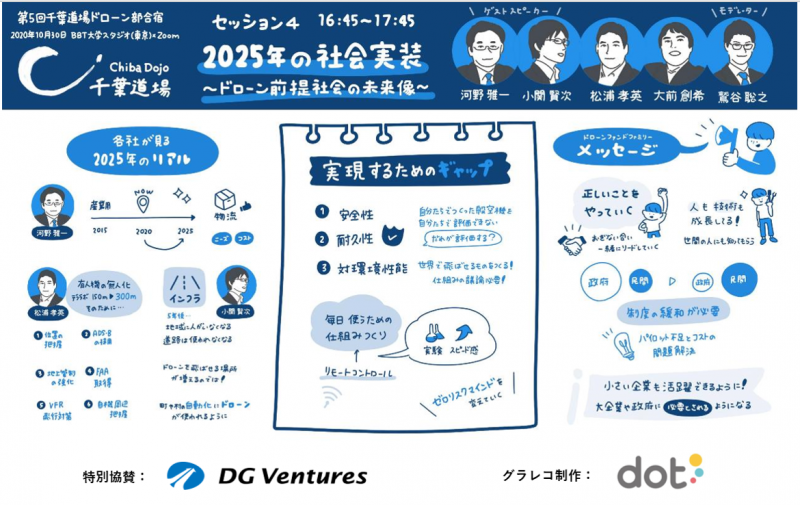 The “graphic facilitation” was realized through special sponsorship from DG Ventures, Inc., one of our LP investors from the 1st and 2nd fund. Chiba Dojo and DRONE FUND would like to thank them again here.

Online “Group Photo” of the Camp

The final theme of the camp was “Social Implementation in 2025 — The Future Image of a Drone-enabled Society.” Mr. Washiya, as the moderator of this session, organized the session with the speakers.

Again, the theme of the discussion was looking ahead to 2025, the future image of social implementation and the issues that need to be resolved in the future five years from now (as of October 2020).

【１】Image of Social Implementation in 2025

It goes without saying that 2025 will be an important year for the realization of a “drone / air mobility-enabled society”. In 2022 in Japan, “level 4” operation (non-visual flight in manned areas) will start, and in 2023, the “commercialization of flying cars” is scheduled. Therefore, we expect that social implementation of these technologies, services and solutions will progress more and more through 2025. The discussion began with the sharing of the image by the three speakers.

First, Mr. Kono, who leads the drone manufacturer  Prodrone Co., Ltd. — which has been leading the research and development of high-quality drones since the dawn of the Japanese drone industry — said, “Especially in the logistics field, drones will be widely used. There must be a cost issue, but the demand will definitely increase.”

Second, Mr. Matsuura of  Terra Labo Co., Ltd. — which aims to develop a large fixed-wing aircraft for utilization in the field of surveying and disaster prevention —  strongly said, “unmanned aerial vehicles will soon share the sky alongside manned aircraft.” In addition, as necessary issues for that trend, he mentioned, “mapping the position of the aircraft”, “adopting ADS-B”, “strengthening ground control,” “acquiring FAA type certificate,” “VFR flight measures,” and “scanning the area around own aircraft” are needed.

Finally, Mr. Koseki of Trajectory Ltd. — which develops air traffic control solutions for drones based on 3D maps — said, “Drones will become more available in both urban and rural areas.” He also said that more drones should be autonomous, especially if many aircraft share the same airspace. 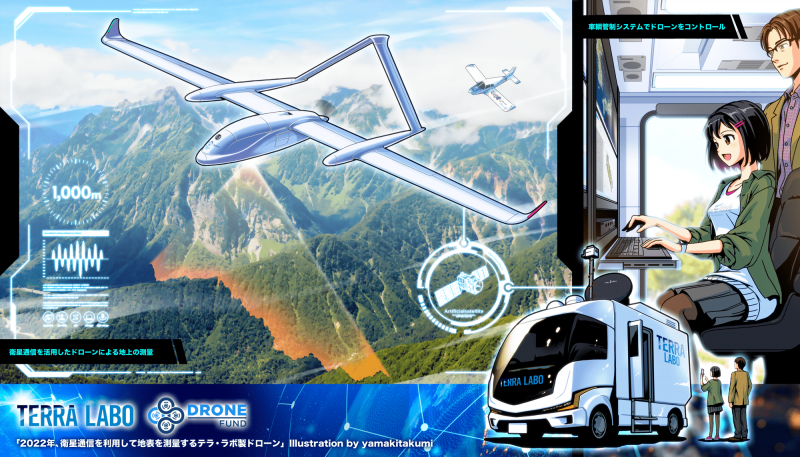 What are the challenges for achieving these scenarios? Three major points were mentioned: “safety,” “durability,” and “environmental performance.” As long as drones operate in environments that are out of the reach of human eyes and hands, it must be able to withstand a certain amount of abuse. That is why the goal to “make something that can be flown in the world” is an indispensable mindset for expanding the drone market.

The speakers also emphasized that “we must create a system for daily use.” While the number of drone’s PoC (Proof of Concept) is increasing nationwide, there are still few cases in which it has led to concrete commercialization. Every seed doesn’t sprout, but it can be said that we need to accelerate the cycle for implementation.

One thing all participants strongly agreed on was the “zero-risk mindset” — which was mentioned as necessary to overcome these hurdles.

In the first place, drones and air mobility are next to risks that are different from ground-based robotics. Aircrafts have won the trust of society through many improvements over more than 100 years. Of course, “safety” must not be neglected for “innovation.” Without overwhelmingly increasing the number of trials and repeating highly transparent explanations for feedback from society, we cannot obtain a position that can be relied on in an emergency or for daily use

To return to the zero-risk mindset talk, safety must be ensured above all else for drone operators, manufacturers, service providers, and customers from private and public sectors. However, the risks associated with the developing technology and the risks of starting something new and innovative need to be considered separately. It is important to distinguish which risks to allow and which to avoid. 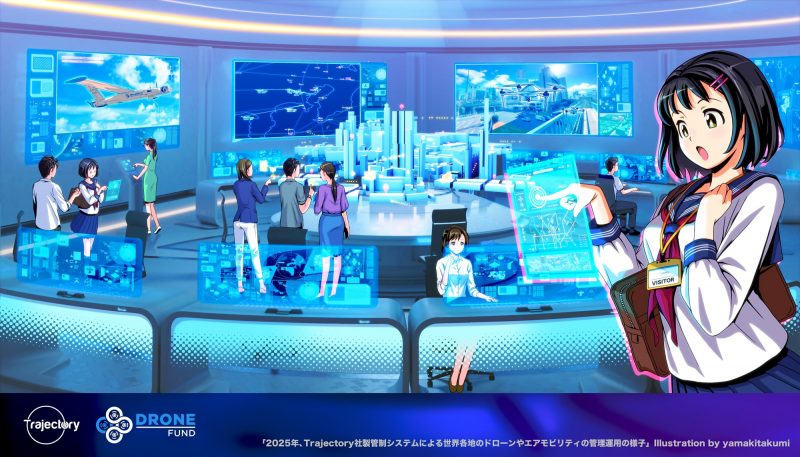 At the end of the session, more hopeful and promising discussions were held from the speakers for the future. Two points were particularly emphasized: “doing the right thing,” and “properly appealing to the public”.

Drones and air mobility have been featured in many media in recent years as one of the technologies that symbolize future society. In the case of the Coronavirus epidemic, people have paid much more attention to drones and drone services from the aspect of enabling “non-contact” and “remote” services.

However, as a solution to the problem, (for example in the field of infrastructure inspection) it is necessary to reconfirm that drones are “only one of many means” and “not an all-purpose solution”. In some cases, the drone may not be the right solution to a problem that the client wants to solve.

In that sense, it is very important to be correct and honest with clients, existing industries, and society in general, not just in the narrow sense of “complying with the law.” On top of that, we have to create solutions, deliver them, and make people happy with them.

These points are important again because startups are aiming for rapid growth by tackling issues that large companies and governments cannot. The final session of the Chiba Dojo Drone Sector Training Camp finished after reaching these major consensus.

To reiterate, the ban on “Level 4” (non-visual flight in manned areas) is scheduled to be lifted in 2022 in Japan, and “commercialization of flying cars” is scheduled for 2023. That’s why, this year, 2021, is very important for predicting the future of the drone and air mobility enabled society. But, on the path to 2025, these are just checkpoints.

The vision of Chiba Dojo from Founder Kotaro Chiba is “Catch the Star.” DRONE FUND will continue to work with startups to realize this vision.

We would like all concerned parties all over Japan and worldwide to pay more attention to and support this new aerial industry, focusing on the activities of our remarkable investee companies, as well as the growing trends in regulations and markets.