（１）Introduction
From July 24th to 27th, 2019, the 4th overall and the 1st official international Chiba Dojo Drone Sector Training Camp was held in Shenzhen, China. This was the first overseas event for the Chiba Dojo family, which is a gathering of C-suite members of the portfolio companies.
Founded in June 2017, DRONE FUND has invested in about 30 domestic companies over the past two years. This closed community for the CEOs and CXOs is the “Drone Sector of Chiba Dojo”. The goal is to create a strong entrepreneurial community to drive tomorrow’s drone and air mobility industry through not only regular information exchange, but also the semi-annual Chiba Dojo camp.

Chiba Dojo, whose mission is to create a happy future that has never been seen and solve the world’s challenges with technology has two rules that are absolutely inviolable. One is a thorough spirit of giving, and the other is confidentiality, as well as not to miss what you have seen and heard during the camp. With these rules, CEOs and CXOs can share their knowledge and experience with other participants comfortably, can break up and exchange opinions, and then form the topic into concrete business talk.

At first glance, the drone / mobility-specific VC DRONE FUND’s portfolio of investments may appear to be crowded with “competitors”. However, this community is closer to a gathering of “comrades” in building the domestic and international drone and air mobility industry together. As the industry is growing at a breakneck pace there is plenty for our members to work through, and that is why the Chiba Dojo training camp is held twice a year. 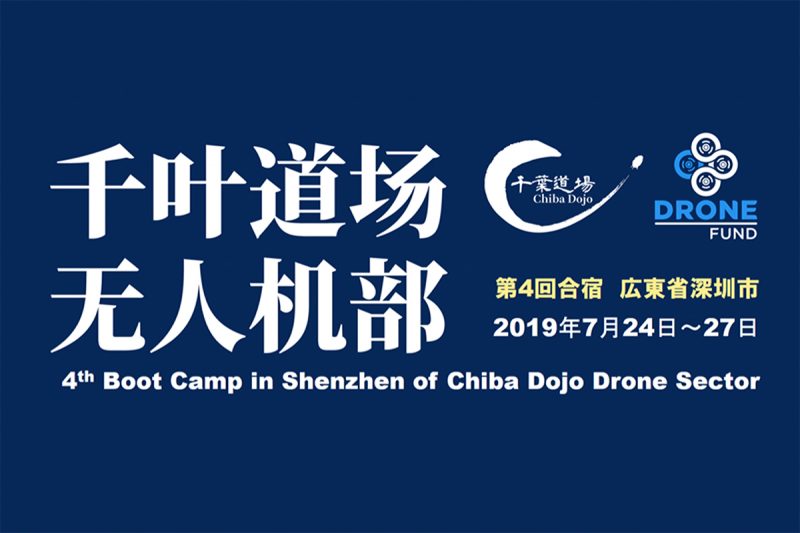 （２）Why Shenzhen?
Shenzhen is close to Guangzhou and Hong Kong, home to Huawei, Tencent (operating the Chinese version of LINE “WeChat”), and the world’s largest drone manufacturer DJI (Daegu). It is also called the “Chinese Silicon Valley”. The strong support of the country, including the designation of special economic zones, has greatly supported the growth of these emerging industries.
The decision to hold the training camp in Shenzhen was due to a number of factors at various times. The biggest factor was Aeronext, guest organizer of the 4th official Chiba Dojo. It is no exaggeration to say that the local network established with the local subsidiary in May supported the direction of this training camp program. The amount of buzz generated also appears in this training camp theme.

hina, which continues to grow overwhelmingly in the field of technology, is located at the top of the drone supply chain. What can we learn from it and where should the Japanese market find its way? This three-night, four-day program was acutely aware of these important issues from the preparation stage.
In addition, this year’s training camp was the first time for two of DRONE FUND’s overseas investor companies to join: Aerodyne Group (Malaysia), which develops DaaS+SaaS solutions and services; and Griff Aviation (Norway), which develops high payload multicopters.
An unprecedented global environment and composition of participants; with Japanese, Chinese and English all being spoken together, not to mention the busy three-night, four-day schedule. The 4th training camp kicked off with a visit to the DJI showroom on the afternoon of July 24 (Wednesday). 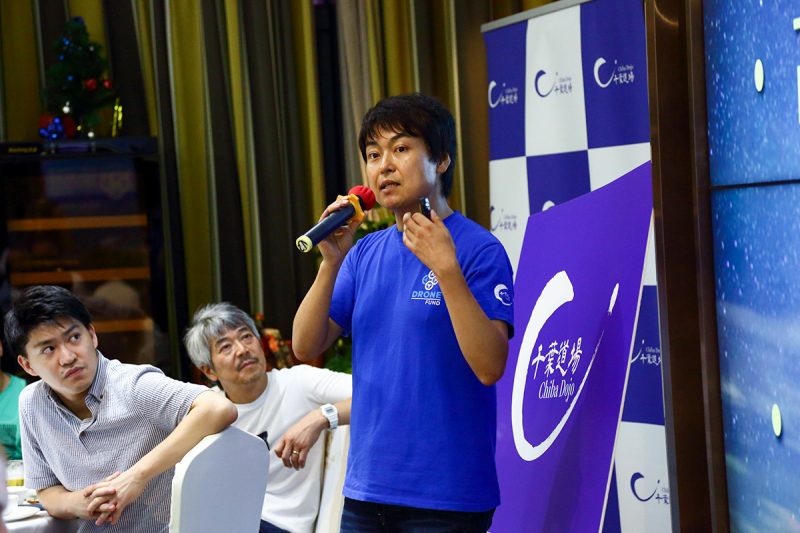 （３）DAY１（July 24th, 2019）
The DJI showroom (Nanshan-gu, Shenzhen City), which is close to Subway Line 2 “Shenzhen” Station, served as the meeting point for the Shenzhen Chiba Dojo. Some participants who entered China by ferry from Hong Kong Airport and other with the high speed train from Hong Kong West Kowloon Station. In the presence of such successful machines such as Phantom and the educational robot RoboMaster S1, which was just released the other day, we were able to see product explanations from DJI staff.
After that, in order to experience the atmosphere of Shenzhen, we visited the “Shenzhen Bay Founding Plaza” (Nanshan-ku, Shenzhen City), where the Tencent headquarters building is located, the shape of which is modeled after the theme “mutual.” This area is full of startups and the companies and organizations that support them. There are educational institutions such as Shenzhen University, the founder of Tencent, and the home school of the rise of horses. It is said to be very active. The group experienced a part of IT technology that has been implemented on a large scale, such as Mobike, the world’s largest bicycle sharing service, and shops, which use facial recognition for payment.
At the social gathering, we received a pitch from Mr. Kamarul, CEO of Aerodyne Group, followed by greetings from Kotaro Chiba, the DRONE FUND representative partner and owner of Chiba Dojo. It was the first day of a training camp full of enthusiasm that slightly surpassed the muggy heat of Shenzhen. 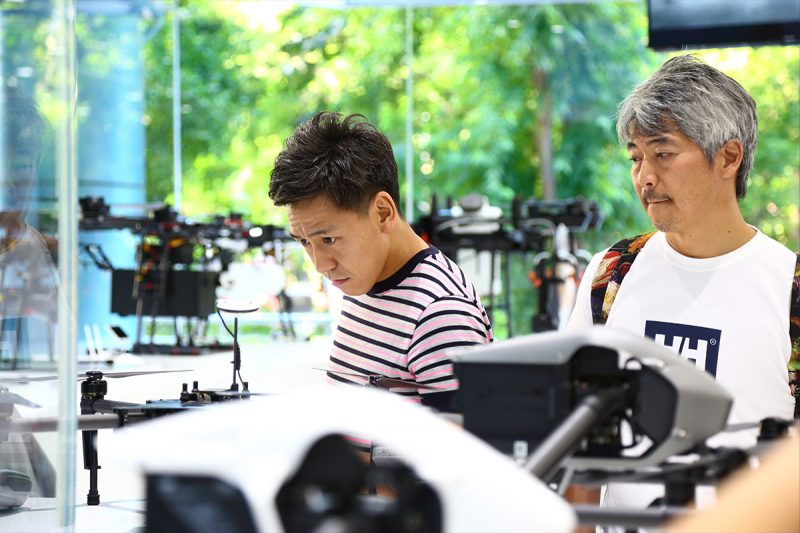 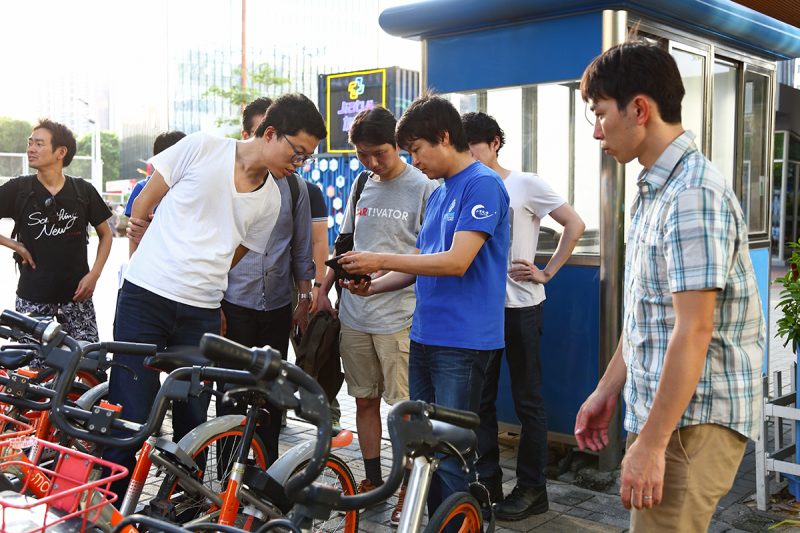 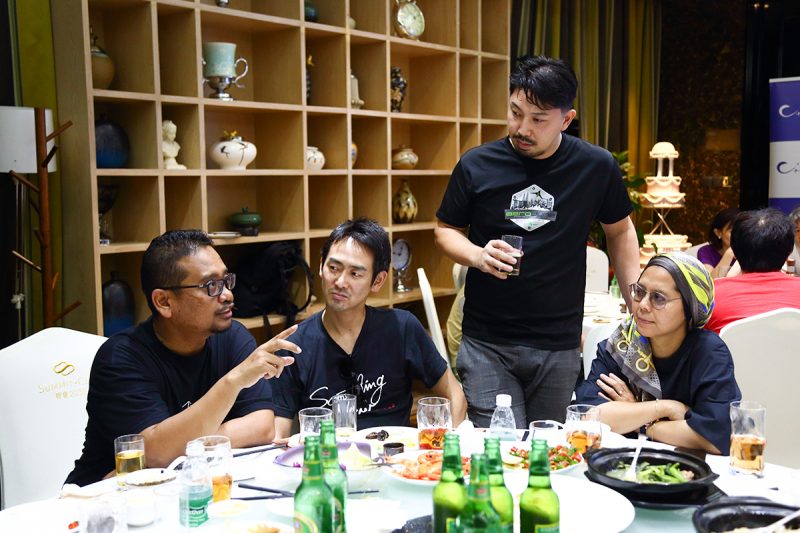 （４）DAY２（July 25th）
The next morning at 7:30, the group boarded the bus and headed to EHang, their first destination. This was to exchange opinions with their leadership about technology and business through company inspections. The schedules for the second and third days consisted of visits to five drone startups in Shenzhen and Guangzhou. This is the first time Chiba Dojo has organized these kinds of company activities.
In between each visit, two members of Chiba Dojo who operate in the same industry would present the “ highlights ” of the inspection based on an analysis of the strengths and weaknesses of the visiting startup. This allowed for C-suite members who work in other industries to get more of an “inside” perspective and learn more about the entire drone space.
Below, we will introduce the startups we visit. Please note however, in accordance with Chiba Dojo’s secrecy, only a brief corporate overview and some photos taken at the time of the visit are posted.
Established in 2014, EHang (Huangpu District, Guangzhou) is a startup that develops low-flying aircraft for passengers and freight. The air mobility taxi business is being developed at a remarkable speed. EHang’s confidence was evident from the video of the company leaders boarding and riding with smiles. 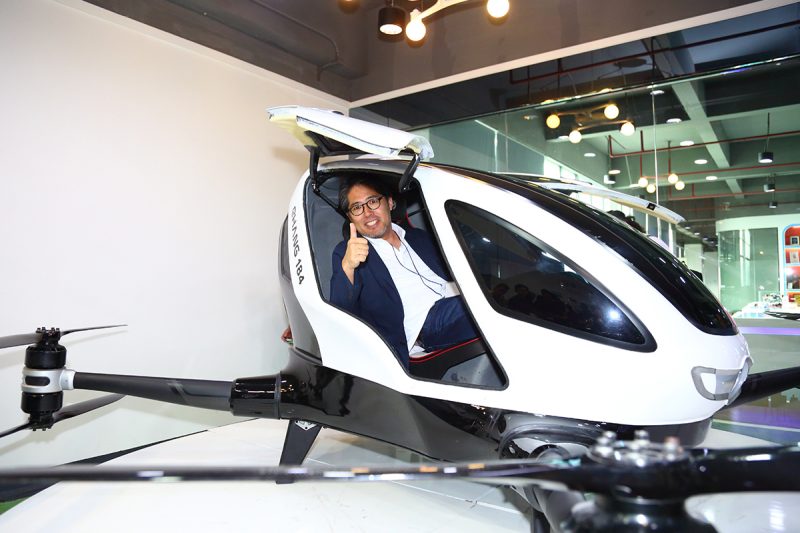 Established in 2007, XAG (Tianhe District, Guangzhou City) is a startup that has taken huge leaps forward by leveraging China’s vast farmland into market potential and specializing in the development of agricultural drones. It is said to occupy 50% of the domestic agricultural drone market share, and contributes greatly to the development of smart agriculture in rural China, where the population is declining and aging. From technical parts, such as the mechanism of agricultural chemical spraying, to data collection methods to business development strategies, XAG received high acclaim from Chiba Dojo members for their solutions and hospitality.

Even though the heat and humidity were draining, no one could sleep even while the bus is moving. Using all the available time was the priority from the start. That is Chiba Dojo. After completing the visits to EHang and XAG, the group conducted a self-analysis session using the “Lifeline Chart” led by Drone Fund representative partner Soki Ohmae on the bus from Guangzhou to Shenzhen.
A lifeline chart is a chart in which maps the ups and downs of one’s own personal and professional life. C-suite members paired off with one another to discuss their respective charts, and gain some insight into the “lifeline” of others. This was an incredibly rewarding experience and an excellent use of the 3 hour ride back to Shenzhen.
During the evening, we had an advanced meet-up session with two companies we were to visit the next (MMC and SMD), as well as three other local startups (Shenzhen YouYing Technology, DY INNOVATIONS, and LeiShen Intelligent System). During this time, members were free to mingle, discuss, and debrief from the busy day. English, Japanese and Chinese flowed freely as members had a lot to say about the day as well as those ahead. 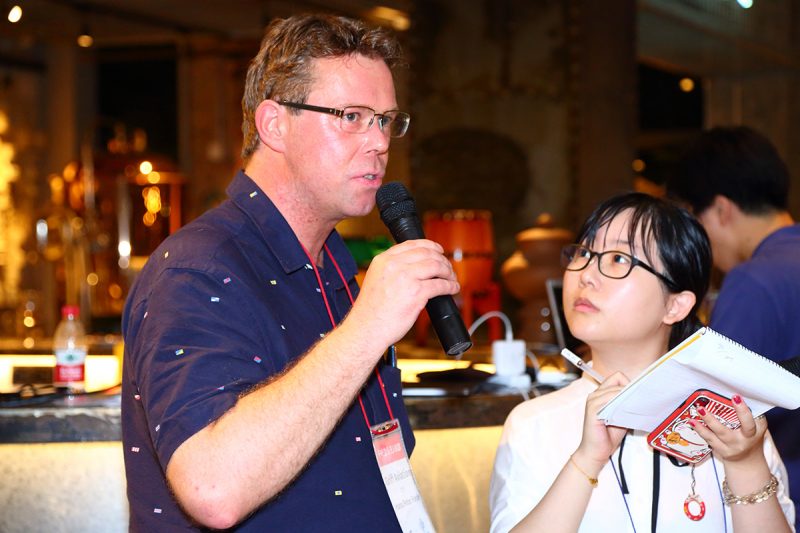 （５）DAY３（July 26th）
The heat and humidity seemed to increase day to day and the third day was almost unbearably hot, but that couldn’t stifle the enthusiasm of the Chiba Dojo Camp and the adventure continued with a visit to MMC in the morning.
Founded in 2010, MMC (Shenzhen, Baoan District), in contrast to the very specifically agriculturally focused XAG, is a startup focused on manufacturing a wide range of industrial drones for multiple use cases. The company was established by a spin-off member of DJI. It also develops drones that can fly for a long-time using hydrogen power. It is a notable company as it has acquired the position of the largest drone supplier in the wind power generation inspection application of the China national power grid (the world’s largest electric power company). 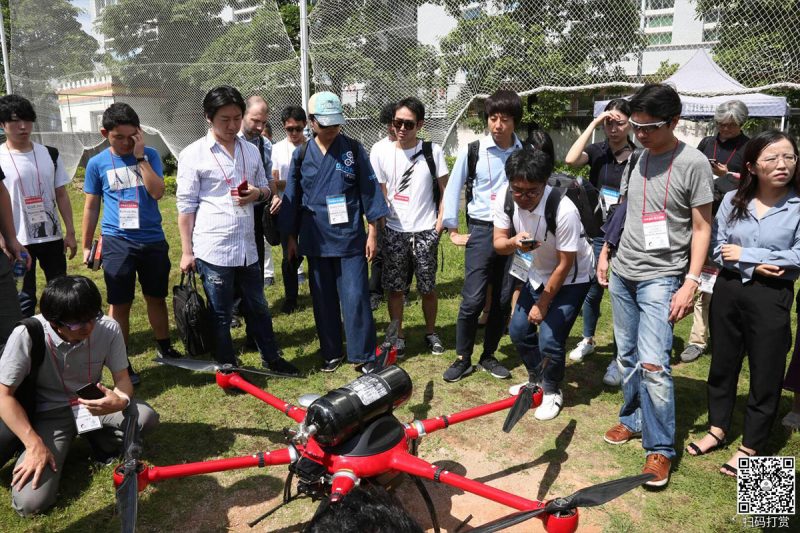 After a morning visit to MMC, the Chiba Dojo continued onto SMD. Established in 2014, SMD (Baoan District, Shenzhen) is developing VTOL (vertical take-off and landing) aircraft that combines tilt rotors and fixed wings. These aircraft have faster cruising speeds and longer cruising distances than multi-rotors, so they demonstrate their strengths in wide-area patrols and remote island / mountain logistics. Like MMC, the test field is on the premises, allowing for demonstrations and flight testing.

Our third stop for the day was at SVV. Founded in 2015, SVV (Nanshan District, Shenzhen City) was a unique company with two sections: VC and Engineering. It should be noted that the hurdle for start-ups partnering with SVV is lowered compared to others, because SVV startups have access to their engineering resources (e.g. production machines, excellent engineers). The metaphor of “Shenzhen and SVV is like water and fish” exemplifies the perfect space for the Shenzhen industrial ecosystem. 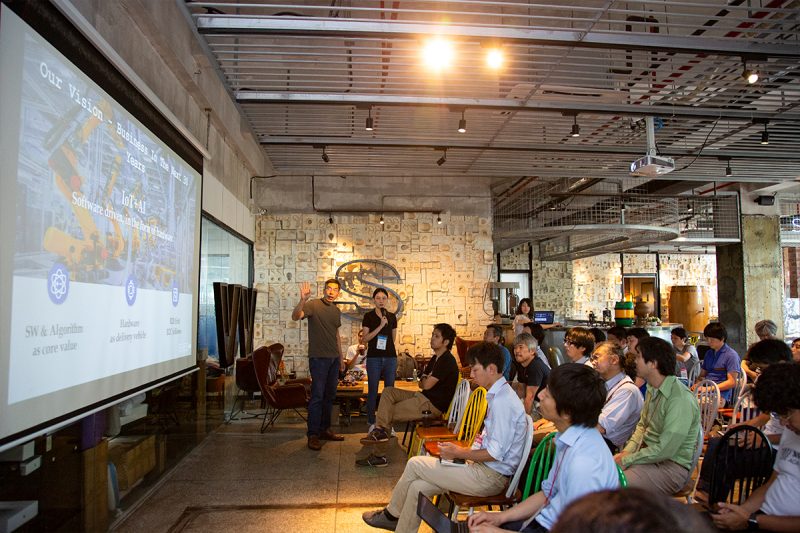 After returning from SVV, the group reviewed the entire schedule after a final session by Dr. Kazuhiro Obara of the DRONE FUND Advisory Board. The theme was: “What can I learn from Shenzhen?” and “What can the DRONE FUND family do?”
While Mr. Obara and Mr. Ohmae lead the debrief, discussions were developed in smaller groups, connecting and jumping into various layers, such as the relationship between the company and its individual fields, the market in Japan and in China. 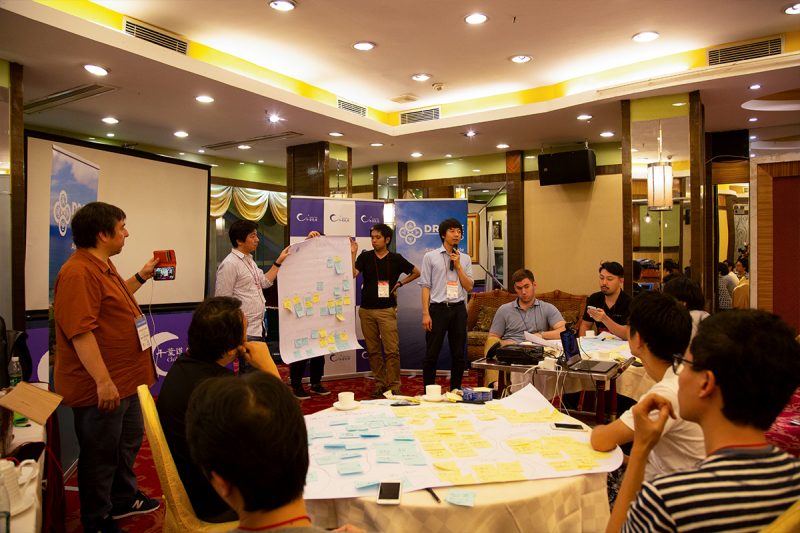 Even after dinner on the final day, the Chiba Dojo wasn’t finished yet! The Chiba Dojo continued with the “Un-Conference” with plenty of critical thinking and plenty of Qingdao beer until midnight. The camp broke down into various groups, discussing a wide range of topics covering an even larger range of industries. One group even brought down some VR equipment! The VR experience booth, organized by Daisuke Imai from the Drone Fund Advisory Board, was particularly popular.

（６）Wrapping Up
The next day was the official end of the 4th Chiba Dojo Drone Camp. There seemed to be various people who left immediately to catch a plane, those who returned home after sightseeing, or those who remained in Shenzhen for a while for work.
The DRONE FUND family strengthened their “family” feeling at this training camp. Bonds that were strengthened all over Japan and across the world. Nevertheless, challenges for the drone industry remain. The experience at Shenzhen Camp was just a “mirror”, what is important is what to do with all we have learned from Shenzhen. 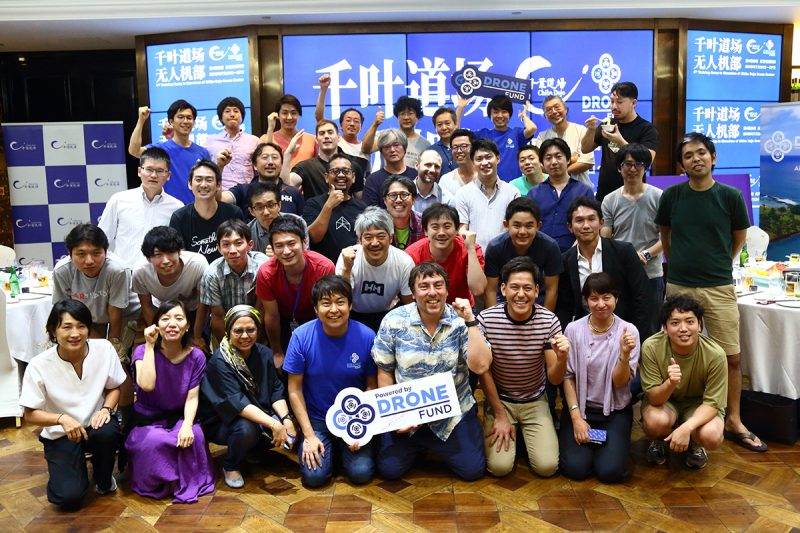